Save your brain by strengthening your legs.

Here are a few bullet points from a recently published study by Claire Steves et al from Kings College in London about leg power and brain function.

1.  Leg power is correlated with cognition over a 10 year period

3.  Fasting blood glucose and diabetes status were other variables associated with cognition.

So, if you want to maintain your brain function over time, stop eating donuts and get your legs in shape.

One simple program is to walk more often and more vigorously.

The other is considering starting the PowerKnee Program.  This is a simple program that activates your primary leg muscles, stretches your hamstrings and uses an exercise bike to strengthen all of your lower extremity muscles.  I have been recommending it to strengthen knees but now the data is clear.  Strengthen your knees and you will also strengthen your brain.

The QuadCrunch helps to activate the quadriceps muscle.   (From the PowerKnee Program)

The results of Steves' study are important because they were conducted in twins over more than a decade.  This means that it is more likely that improved leg power results in better cognition because they controlled for genetics in addition to a variety of other factors.

AM
Total Tendon
Posted by AM at 1:25 PM No comments:

Tiger Woods is getting better

Check out Tiger Woods' swing.  It looks like he is feeling a lot better after multiple back surgeries.

Best of luck for a full recovery.


Video of my own back surgery.

Signing of the Stars and Coach Jim Harbaugh

Seek a unique perspective.
Harbaugh and his expert production team took a rather mundane event (signing of high school football players) and turned it into an Oscar-like event.  The day inspired not only the Michigan football program but the entire university. 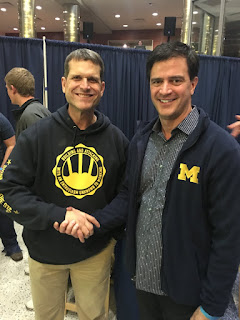 Sometimes you just have to ask.
Former Notre Dame Coach Lou Holtz helped carry the event with excellent one liners.  Why did a coach from another school come to a Michigan football event?  Simply because Jim Harbaugh asked him.  To the new Michigan players Holtz said:  "You didn't just make a four year decision, you made a 40 year decision"  He understands and articulated how the new players would be part of Michigan for the rest of their lives---a powerful message.

"Some people think less is more, I believe more is more."---Jim Harbaugh
Jim Harbaugh doesn't like meetings and discusses strategy on the field with this players and coaches during marathon four hour practices.  We all should have less meetings and execute instead of engaging in perpetual discussion.

"Those who stay will be champions"-----Coach Bo Schembechler
Harbaugh added a corollary to that famous Michigan axiom.  "Try hard and you will stay".  He has written this above the exit sign from the Michigan locker room.  The implication is clear.  Work as hard as you can and you will stay.  Stay and you will be a champion.  Embracing this mindset could help all of us in our chosen professions. 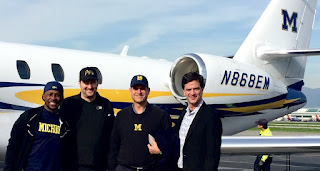 "Attack each day with an enthusiasm unknown to mankind."---Jim Harbaugh
Harbaugh and his team gave a swag bag full of gear emblazoned with his motto to all the presenters.  After the star-studded event was over around 1 pm, Harbaugh, true to form, was quoted by the Michigan daily as saying:  “We’ll be back to work at 2.30.”  Translation---have some fun but then return to the relentless pursuit of being one of the leaders and best.

Video montage of the event produced by VisionVideo360


AM
@bloodcure
TotalTendon
Posted by AM at 1:07 PM No comments: