Platelet Rich Plasma (PRP) has been used now for more than a decade to treat a variety of orthopedic conditions.  Hundreds of thousands of patients have been treated with a stellar safety record.  The efficacy of PRP has evolved over the years but there are now multiple randomized controlled trials supporting the use of PRP.  This data has been presented at major medical conferences all over the world and published in peer reviewed elite journals such as the American Journal of Sports Medicine.

Below are the highlights from a few of the published papers: 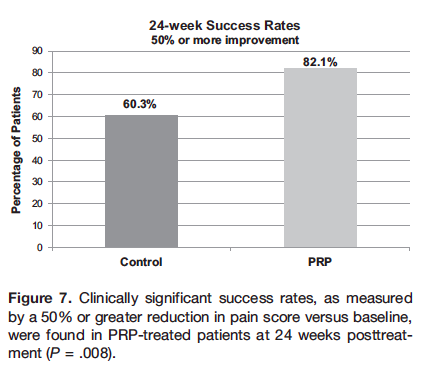 There was also significantly less elbow tenderness in the PRP treated patients compared to the active control group at six months. (P = 0.009)

These two trials used the same protocol and same PRP device (Biomet GPS PRP).  There were no significant complications in either study.   Successfully treated patients were able to avoid more invasive and expensive surgical interventions.  This is clear evidence supporting the use of PRP for chronic tennis elbow.

PRP More Effective than Placebo in the Treatment of Knee Osteoarthritis
American Journal of Sports Medicine 2013 (156 knees)
50% improvement in pain scores was noted using PRP compared to worsening of pain in the placebo group at 6 months.  (P < 0.001)

There are now over 7400 references to PRP on PubMed with more than 500 publications last year alone.  This is an indication of the worldwide interest in this topic.   There are literally hundreds of published papers supporting the use of PRP and other blood components to treat disease.  More research and development will always be needed but using a patient's own blood to treat their injuries and disorders simply makes intuitive and scientific sense.

Patients and providers with experience with platelet rich plasma or other biologic treatments are encouraged to post comments below.

Tennis elbow is a very common problem.  Most often it can be treated with rest, activity modification and some simple exercises.

In future posts, I will demonstrate a strengthening protocol and discuss other treatment options.

AM
TotalTendon
Posted by AM at 4:59 PM No comments:

California offers its citizens excellent health care.  It has over 100,000 hard working physicians dedicated to taking superior care of their patients in conjunction with well-trained nurses, medical assistants, technicians and support personnel. (Ref)  According to US News and World Report, 17 of California's hospitals are nationally ranked in specialities such as oncology, cardiology and orthopedic surgery.  Fifty-six other hospitals meet standards for strong performance within the state. (Ref)

Proposition 46 is a direct threat to our superior California healthcare.   It would undermine a physician’s ability to best care for patients and result in dramatically higher costs—$9.9 billion annually according to one study (Ref)   Doctors already concerned about malpractice would face increased pressure to practice defensive medicine.  If this measure passes it will also be difficult to recruit and retain specialists who are in high risk specialties including OB/GYN, trauma surgery and neurosurgery.

Proposition 46 further creates a disincentive for physicians to implement novel solutions to challenging diseases.   Medical innovation is needed to attack arthritis, cancer, diabetes, and the emerging Ebola epidemic.  If Proposition 46 passes, physicians will be less inclined to pursue new transformative solutions for fear of being sued and medical innovation will stall.  Instead of California physicians and hospitals being recognized as worldwide leaders in medicine, we may no longer be able to offer patients cutting-edge care within our state.

Unfortunately, many Californians are unaware of the significant issues that will arise if Proposition 46 passes.  Over the past several months, I have had discussions with dozens of people about 46 and have been surprised at how little they know about this onerous proposition.  Their lack of awareness is frustrating because the trial lawyers completely understand the implications of the proposition they drafted.  As we approach the upcoming election, I strongly urge California residents to read and analyze proposition 46.    Prop 46 Info

One concern imbedded in the proposition that should be addressed is the need to curtail multiple prescriptions from being written and filled by deceptive patients.  The solution to this problem is not to pass the three-headed monster known as Proposition 46.  The better answer is to improve tracking technologies such as CURES that eliminate duplicate prescriptions from being ordered or filled at a pharmacy and at the same time increase the criminal penalties for patients that fraudulently try to
obtain multiple narcotic prescriptions.

If you wish for California to maintain its worldwide leadership in the delivery of outstanding medical care, I urge you to Vote NO on Proposition 46.

Survivor Blood to be used as an Ebola Treatment 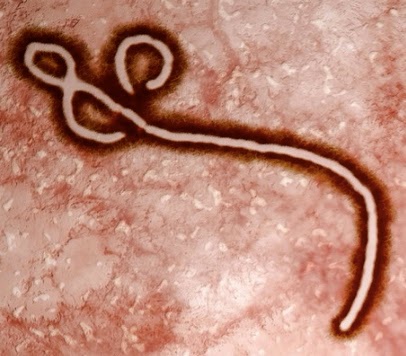 The Ebola epidemic is spreading and there is no cure.  Treatment options even in the United States are limited because there are no approved drugs and even the supply of experimental ones have been exhausted.  (See Washington Post Article)

Is it possible that blood could cure Ebola?

That is exactly what the New York Times (read full article here) is reporting as a possible treatment.  The concept is actually pretty simple.  Patients who have been infected with Ebola and survive develop antibodies to the virus.  These virus destroying proteins live in the serum of the blood.  A transfusion of serum or perhaps even whole blood may be the best option as a stop gap measure to treat the expanding number of patients with the disease.  The World Health Organization even has a specific guidance document on the topic.  (WHO convalescent blood for Ebola)

In this space over many years, I have discussed how to use blood therapeutically for regenerative medicine.  Discussions about platelet-rich plasma, bone marrow concentrates and stem cells from peripheral blood have focus primarily on orthopedic injuries and disorders.  Blood as a treatment for Ebola will receive more attention in this blog.  Anyone with blood expertise of any kind should do whatever they can to help.  Please post comments or send me information about how blood is being used to treat Ebola:   @bloodcure on Twitter.

The potential restorative powers of blood are considerable and if it is possible to stop the epidemic or at least slow it down by using the serum of survivors as a treatment, we should do everything we can do execute on that strategy in addition to pursuing containment, supportive care, and experimental drugs.

Concussions and the Michigan Football Program

It is appalling what happened on the Michigan football field last weekend.  A young man, quarterback Shane Morris, already suffering from an ankle injury, gets absolutely rocked by a blitzing defender.  The video shows how Morris's head snaps back and he falls to the ground like a rag doll.
(Detroit Free Press Article with videos)

It is absurd to excuse anyone on the Michigan sidelines for not knowing that Shane Morris may have had a concussion on that play because a major roughing the passer penalty was called.  He was also clearly staggering.  I am a double Michigan alumni (BS, MD) and love the school and its athletics.  I have also been on the sidelines of many high school, collegiate and professional football games as one of the team physicians.  The reason the physicians are there is to watch the game and scan the players for any real or potential injuries during or after each play.  It is difficult to understand why a serious roughing the passer penalty was not a clear indication for Morris to be evaluated especially before reinserting him into the game.

It is equally amazing that Hoke did not know about the potential extent of the injury the day after the game.  He may be incompetent as a coach given Michigan's record over the last few years but he is clearly dangerous when it comes to executing his responsibilities to protect his players.

What is even more telling than the even the video are still shots from the video. 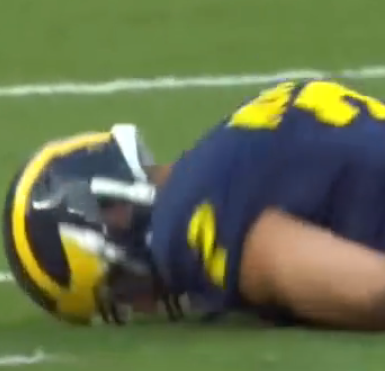 At the very least, Michigan needs better injury procedures in place and a coach that isn't frankly dangerous to his players' short and long term health.