Using a 3D Printer to Make a Knee Meniscus

Meniscus cartilage is the cushioning tissue between the femur and tibia bones of the knee.  Millions of Americans each year tear this cartilage.  Loss of the meniscus tissue can lead to arthritis.

In this novel approach, researchers in New York are using a 3D Printer to create a new meniscus.  They have studied in sheep so far with success.  In the future, it may be possible to use an MRI scan with a meniscus tear to help program a 3D printer to make you a new meniscus.  Treatment in human patients is not yet available but this is quite an intriguing possibility for the future.

AM
TotalTendon
Posted by AM at 9:46 AM No comments:

The report suggests the talented Mr. Clowney will be out for 9 months or more.  Just what is microfracture surgery and why does it take as long to recovery as it does for a baby to born?

Let's start with the basics.  There are two types of cartilage in the knee.  The surface cartilage which covers the bone.  This is known as articular cartilage and can be thought of a type of cap or covering of the end of the bone.  This cartilage is present in any joint.  In the knee, there is another type of cartilage, the meniscus cartilage.  There are two menisci in the knee--medial (inside) and lateral (outside).  When the surface "articular" cartilage is damaged, the knee can become quite painful especially with loading and twisting.  Think rushing a passer for example.  Similar symptoms can occur when the meniscus is torn.  It is often difficult to distinguish between the two in terms of which one is the pain generator.

Microfracture surgery is an attempt to create a tire patch over a cartilage defect by poking a hole in the end of the bone and creating an access channel to the bone marrow.  The bone marrow then leaks out via the holes that are created and forms a clot which over time can help cover the defect.  It takes time, many months, for this surgery to work because the "patch" needs to mature.  This technique is useful for small defects in the cartilage but hasn't proven to be great for larger defects.  We do not know the size of Mr. Clowney's knee cartilage injury.

Recent evidence suggests that the addition of platelet-rich plasma can enhance microfracture surgery results.  This has been shown in basic science, preclinical and now clinical studies.

This type of surgery at such a young age is clearly not a good sign.  In the long run, he may require further intervention.  Please read the post below for further information about why we need to accelerate our regenerative medicine efforts.  Mr. Clowney is one of tens of millions of people worldwide with symptomatic cartilage damage.  We need to maximize outcomes of today's surgical techniques and develop new procedures to help keep our athletes and patients in the game.

Will Kobe Bryant go to Japan to Treat his Knee Arthritis? 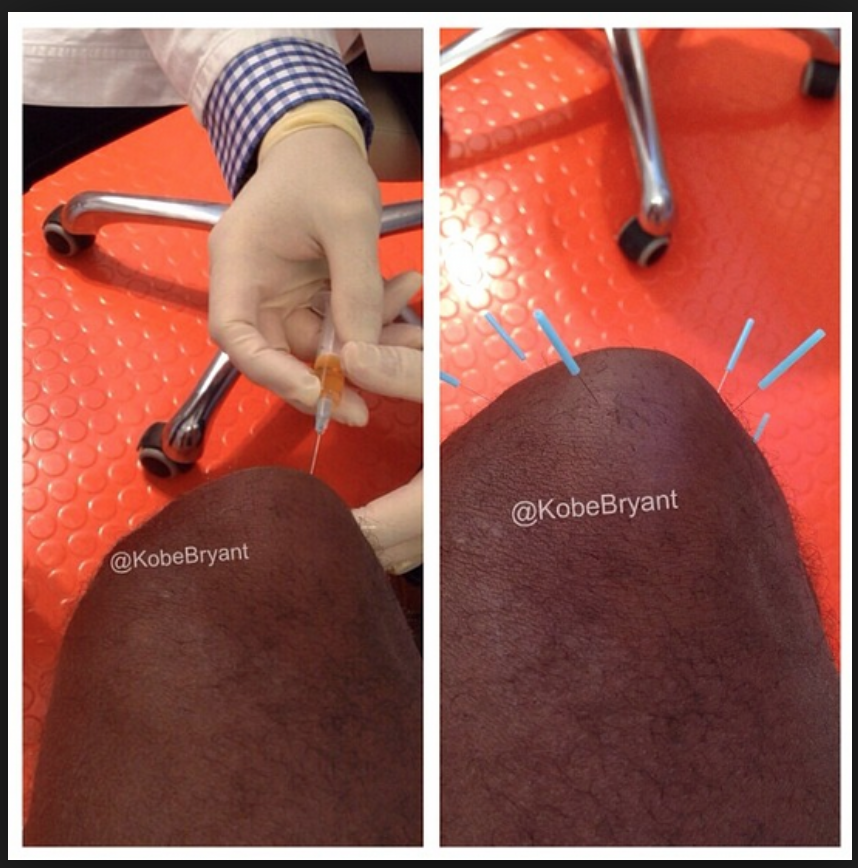 Kobe Bryant, an elite professional athlete from the National Basketball Association’s Los Angeles Lakers, has gone to Germany multiple times to be treated with a portion of his own blood for his creaky, arthritic knees.  The reason why he went to Germany is simple.  He wanted to have the best chance to play at the highest level in the NBA and he had exhausted all his options in the United States.  He went there to be treated with a component of his own blood that targets the inflammation associated with knee osteoarthritis.  The treatment he received is not approved here in the United States.

Will he go to Japan next time to get the most advanced therapy?  That may happen because in November 2014 Japan enacted legislation creating a new pathway that accelerates the approval process for regenerative medicine products.  We here in the United States need to figure out how to best accelerate our own regenerative medicine efforts or continue to watch our elite athletes and other patients seek treatment beyond our shores.  Let’s explore why Japan acted boldly in favor of regenerative medicine.

A Nobel Prize was awarded to Japanese researcher and former orthopedic surgeon, Dr. Shinya Yamanaka in 2012 for his pioneering work on how to reprogram mature skin cells into pluripotent stem cells.  His potentially life saving work and the national pride associated with it helped Japan become a worldwide leader in stem cell research.  Importantly, Japan has also prospectively pursued and passed legislation that will dramatically stimulate regenerative medicine.  The country took a leap into a bright future last week with the implementation of regulatory reforms directed at accelerating the development of cell-based treatments.

The new law established a separate pathway for regenerative medicine products apart from traditional drugs and medical devices. The regulations also created a system that fosters faster commercialization of novel biologic products and can lead to time limited approvals for up to seven years.   Post market data analysis will continue to confirm the safety and efficacy of the regenerative medicine products with the potential to revoke approvals.

The action by the Japanese government creates the proper equilibrium between the need for accelerated approvals for cell based therapies that have established efficacy while ensuring product safety.  The typical phase one, phase two and phase three trials for new drugs are not a proper pathway for cell-based therapies that have highly complex mechanisms of action that may or may not be identified even with elite preclinical models.  Importantly, many cell-based products come directly from a patient’s own body and therefore have a dramatically higher safety profile.

Americans are screaming for new treatments for a variety of difficult problems such as arthritis, heart disease and diabetes.  Regenerative medicine and especially cell-based treatments have a chance to help treat and potentially cure these problems.  We need to follow the Japanese lead and create similar pathways in the United States.  Last year during a visit to Japan and its PMDA (the equivalent of the FDA), I was staggered by how engaged they were about regenerative medicine and receptive they were to understanding how to bring safe and effective biologic products to their populace.

The United States can learn a great deal from Japan’s enlightened approach to regenerative medicine.  Safety of course should be paramount.  The idea of a conditional, time-limited approval with reimbursement strikes a perfect chord as we seek better treatments for our patients at more affordable prices.  Competition will arise to obtain approvals based on phase two trials that confirm safety and show a solid degree of efficacy.  Importantly, more competition will lead to better options and faster innovation similar to the computer industry over the last several decades.

We need to also emulate our Silicon Valley technology colleagues and call for a Medical Moore’s Law.  Identify a specific clinical problem, create a novel solution and within five years double the efficacy and decrease the price by fifty percent.  Data analysis via powerful graphical algorithms should assist with new discoveries and also help with better management of many diseases.

We must seek dramatically higher horizons instead of being satisfied with iterative improvements.  The Japanese government should be congratulated for passing regulatory reform and implementing transformative solutions.  Sooner, not later, we need to find ways to execute our own regulatory reforms here in the United States to help our patients and to remain competitive on the world stage in regenerative medicine.

Perhaps, then Kobe will be treated in California instead of Germany or Japan.


Please post any comments or suggestions about how to safely accelerate regenerative medicine.